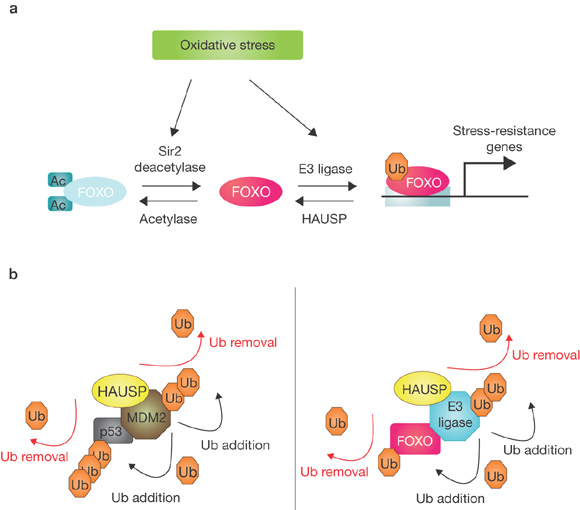 Ubiquitin (Ub) is an amino acid residue protein that covalently binds to all lysine target proteins and helps to regulate stability, sub cellular localisation, protein-to-protein interactions and enzymatic activity. The process of protein ubiquitination occurs through a sequential three stage process that involves ubiquitin activating, ubiquitin conjugating and ubuiquitin ligase enzymes. Hence by adding a single Ub moiety to a protein is what is referred to as monobiquitination. In this there is the modification of several lysine residues within the protein by single Ub moieties that are known as multiple monoubiqutination. This addition of the ubiqutin moieties also become modified by the lysine residues in an iterate fashion that has come to be known as polyubiquitination. Monoubiquitination involves the regulation of endocytosis of membrane proteins, repair of DNA, histome activity and retroviral budding (Suzuki et al, 2011).

According to Suzuki et al (2011), this plays a hand in the parkin gene that is predominant cause of the autosomal recessive hence an early onset of Parkinson’s disease. According to some studies, ubiquitin ligase has been associated with the ubiquitin proteasome system; this is major intracellular proteolytic machinery that destroys unwanted proteins. In such a situation E3 does collaborate with other two members such as ubiquitin activating and conjugating. These are used in the process to catalyse the formation of a ubiquitin chain on its substrates that will act in targeting a signal for proteasome that mediates degradation. In most cases the litigation process that reacts and associates with ubiquitin mediated process that associates with the protein degradation to occur between the terminal residue of one ubiquitin molecule and an internal lysine residue. The ubiquitin chain assembly can also occur at alternative K residues within the molecule such as K63. In addition proteins can be monoubiquitinated. It can be concluded that the non-canonical modifications of ubiquitin usually to be used in serving as non-proteolytic signals that are involved in various cellular process including DNA repair and the process of endocytosis.

Many models have been created for the purpose of the ubiquitin receptors recruit the ubiquitination machinery to be used for promotion of coupled monoubiquitination. As compared to in the case of binding of the UIM to ubiquitin that is required for coupld monoubiquitination. Some of the reasoning include UIM of eps15 thay may bind ubiquitin to the attached E3 ligase; this eventually leading to monubiquitinate eps15. In testing such a hypothesis in the use of in vitro came in for ubiquitination system that the substrate eps15 was added together to E1, E2 and E3. In a step by step process, this would exclude a number of models like the ‘E3 thiolester model’ the UIM would then bind to the ubiquitin linked through a thiolester for the catalytic residue of Nedd 4 and it will subsequently be followed by a transfer of ubiquitin to eps15 (Suzuki et al, 2011).

An important issue is that of the mechanism of coupled monoubiquitination and in how it occurs. In such instances the ubiquitin receptors will tend to be monoubiquitinated rather than polyubiquitinated. The characteristic of the E2-E3 complex and whether the UBD blocks form the polyubiquitin chain once the first attachment takes place. In a different scenario is that of whether structural data from the UBD and attached monoubiquitin is the same protein that supports the model. The intermolecular interaction between the UIM and covalently attached ubiquitin has been shown to restrict the chain extension of the transcription factor Met 4 by a process of shielding the terminal molecule of the ubiquitin.

Chew et al (2011), states that despite some genes like parkin being associated with destruction and degradation, it has also revealed that parkin is a unique E3 that is capable of mediating the monoubiquitination as in the case of K-63 which is linked to polyubiquitination. In is an intrigue that to note the single enzyme could exhibit some multifunctional properties. This is an intrigue as such a single enzyme could be able to exhibit the multifunctional properties it does.

Ligand-Induced ubiquitination of membrane receptors such as tyrosine kinases is implicated in receptor internalization and endocytosis. In yeast, monoubiquitination of the G protein coupled along with receptors results in internalization and subsequent degradation in the yeast vacuole; this normally being an equivalent of the mammalian lysosome. In such a case, the situation is more complex as the trans-membrane a receptor and an endocytic adaptor in which proteins will undergo the ubiquitination upon the process of stimulation by the ligand. Monoubiquitin (mono Ub) has been used in the serving of both internalization and sorting signal all in one. In recent analysis by use of quantitative mass spectrometry it has revealed that epidermal growth factor receptor (EGFR) is multi-monoubiquitinated and at the same time polyubiquitinated through the Lys63 linked chains. Such demonstrations reveal that despite the monUb being sufficient for internalization as seen in yeast, the polyubiquitination through Lys63 will generate a more efficient internalization signal and in the process is able to increase the activity of binding avidity to Ub-receptor proteins (Suzuki et al, 2011).

Normally parkin is a unique E3 that is capable of mediating ubiquitination in an E2-indepent situation. Notably the full length parkin will catalyse E2-independent monoubiquitination in vitro thus a truncated mutant retaining only the C-terminalIBR-R2 region that is left for the purpose of catalyzing both the mono and polyubiquitination especially in the case of E2 being absent. In support of this, a mass spectrometry analysis revealed the presence of a K48 linked polyubiquitin in reaction products catalysed by IBR-R2 that goes on to become modified in presence of E2s that occur in reactions that contain full length parkin. When taken together the parkins IBR-R2 contains an activity of intrinsic nature whose activity leads to catalyzing effect resulting in formation of polyubiquitin chains in the presence of E2s (Suzuki et al, 2011).

The monoubiquitinated Ub-receptors sometimes may form severa; tiers of ubiquitination that is dependent on interactions in the endosome thus binding the ubiquitinated cargo through their UBDs and recruit another layer Ub-receptors through a monoUb signal in leading to amplification and progression of ubiquitinated cargos along the endocytic pathway. The recruitment of the Ub receptors may also be accomplished via a process that is controlled by spatila distribution of phosphoinositol lipids and the PI binding proteins. All this in turn end up binding to and recruiting Ub-cargo binding proteins. A number of structurally distinct PI-binding domains anchor endocytic-sorting machinery to ubiquitinated cargo on membranes. The PH domain of dynamin and epsin binds to PI that serves as marker of the plasma membrane. The PI controls both early and late clathrin coated vesicle formation by binding with AP2 subunits, epsin, dynamin and OTHERS. THE DOMAIN OF Hrs and EEA1 binds to PI3p all of which is critical for endomosal maturation and budding of the multi vesicular body.

Tob is a member of anti-proliferative Tob/BTG family of proteins that are involved in the regulation of cell cycle progression at the G1 phase. In cell cycle, the levels of Tob’s expression and phosphorylation status change during this stage. The in many human cancers, the decreased expression and phosphorylation have been detected including cancers of the lung and thyroid. These have led to suggestions that the level of Tob expression and its phosphorylation is strictly regulated in order to maintain normal growth of the cells. As is the case in the Tob family, the family genes are regulated by the transcriptional level that occurs during cell differentiation or in the cases of DNA damage responses.  Other reports indicate that the post-translational the Ub or proteosome pathway that is also involved in control of the amount of proteins. There are several Ub ligases that influence the level of Tob protein and proteosome-mediated degradation of Tob is important for regulation of the cell cycle progression.

In the case of proteins, they are targeted by the Ub and proteosome system that is marked by a covalent linkage to Ub. Earlier Ub was initiated was activated by an Ub-activating enzyme in a manner that is ATP dependent. The activated Ub becomes subsequently transferred to an Ub conjugating enzyme and this eventually will bind with a lysine residue on the substrate in the process mediated by an E3 ligase. In terms of cellular structure, the Ub modifications tend to be dissimilar. In monoubiquitination which is the covalent modification of the proteins by a single Ub, is an important part of the regulation of signal transduction, endocytosis and repair of DNA processes. In addition, the number of Ub-binding domain that contain proteins that are to be monoubiquitinated in vitro that is independent of the activity of E3 ligases. Monoubiquitination of ubiquitin-binding proteins inhibits their capacity to bind to and control the functions of ubiquitinated in vivo.

In Vitro monoubiquitination of Tab

The Tob/BTG family proteins are polyubiquitinated and subsequently degraded by the 26S proteisome.  Several of the E3 Ub ligases are responsible for Tob ubiquitination in cytoplasmic extracts as in vitro  ubiquitination assay using recombinant E1, E2 and Tob-His as well Ub. The slow migrating form was recognized in the anti-body hence was produced only when all the protein components were present.